Skip to content
Royal Avian The Evolution Of Consciousness and Spiritual Transformation In The Post-2012 New Earth. May 26, 2021July 23, 2021 3 Minutes
Book a Healing Session

The covid event has sparked much commentary about dark forces at work on this planet and their attempts to sabotage and subvert the rise of consciousness that is well underway on Earth. Sadly it seems the Draco get a bum rap for their supposed malevolent agenda to hijack and oppress – something to do with reptilian beings and an outfit known as The Illuminati – but I cannot speak to this topic as I haven`t much interest in it. The point of this piece is to make clear that many humans who are of Draco incarnational lineage – meaning that their inception as a direct Source incarnation originated in the constellation Draco – are firmly of the Service To Other cohort. They are The Light Draco and they are playing a key role here now in the golden Age of Aquarius.

(Note : as Awareness continues to increase and expand within collective mass-consciousness it is rousing in many the remembrance of ancient knowledge, bringing greater understanding and appreciation of our galactic heritage and our links with the stars and constellations. You are swinging back into alignment with starseeded wisdom as you go right back to the beginning and your very inception as a direct Source incarnation. This Awakening represents your path back to reclaiming your prototypal power, your original essence, and just as various celestial bodies and star systems each play their part in the Universal order while also fulfilling a specific, unique role in informing and shaping Earth`s ascension, so do you Starseed)

There`s a gutsiness and determination about the Light Draco that I admire for they are born leaders, but where the Atlanteans lead by example the Light Draco actively and visibly lead from the front.  Innately prescient, visionary and natural motivators the Light Draco are here on Earth to drive the process of necessary change ;  they galvanize others to accomplish and bring about whatever needs to be achieved both at the quantum level and by the collective.  Using reason and stimulus the Light Draco fire others with enthusiasm and they inspire unwavering resolve yet sexily there seems to be an ease and effortlessness to it all.  This is largely down to the Light Draco`s ability to stretch and bend Time which allows them to undertake multiple creational endeavours at any given moment and to achieve the seemingly unachievable.

Nonconformist and freethinkers at heart the Light Draco like to challenge timeworn and outdated systems, practices and traditions however they are careful, considered and intelligent in their rebellion.  The Light Draco possess a sense of dignity and purpose :  they hold the knowing that they are here on some greater mission however they remain strongly grounded and centred in this knowing.

The Draco are blessed with crystal clear perception and pin-sharp discrimination in their visual and aural senses – they are able to see and hear Truth and discern what is actual, differentiating absolute Truth from illusion.  Socially, the Light Draco are adaptable and easily fit in.

Draco (Latin for the Dragon) is one of the largest constellations in the sky and is located in the third quadrant of the northern celestial hemisphere :  it is visible at mid-northern latitudes and it`s a circumpolar constellation, meaning it never sets below the horizon for many observers in the northern hemisphere.  This serpentine configuration of stars hangs out between the Big Dipper and Little Dipper.  Draco is one of the Greek constellations :  it was first catalogued by the Greek astronomer Ptolemy in the 2nd century. 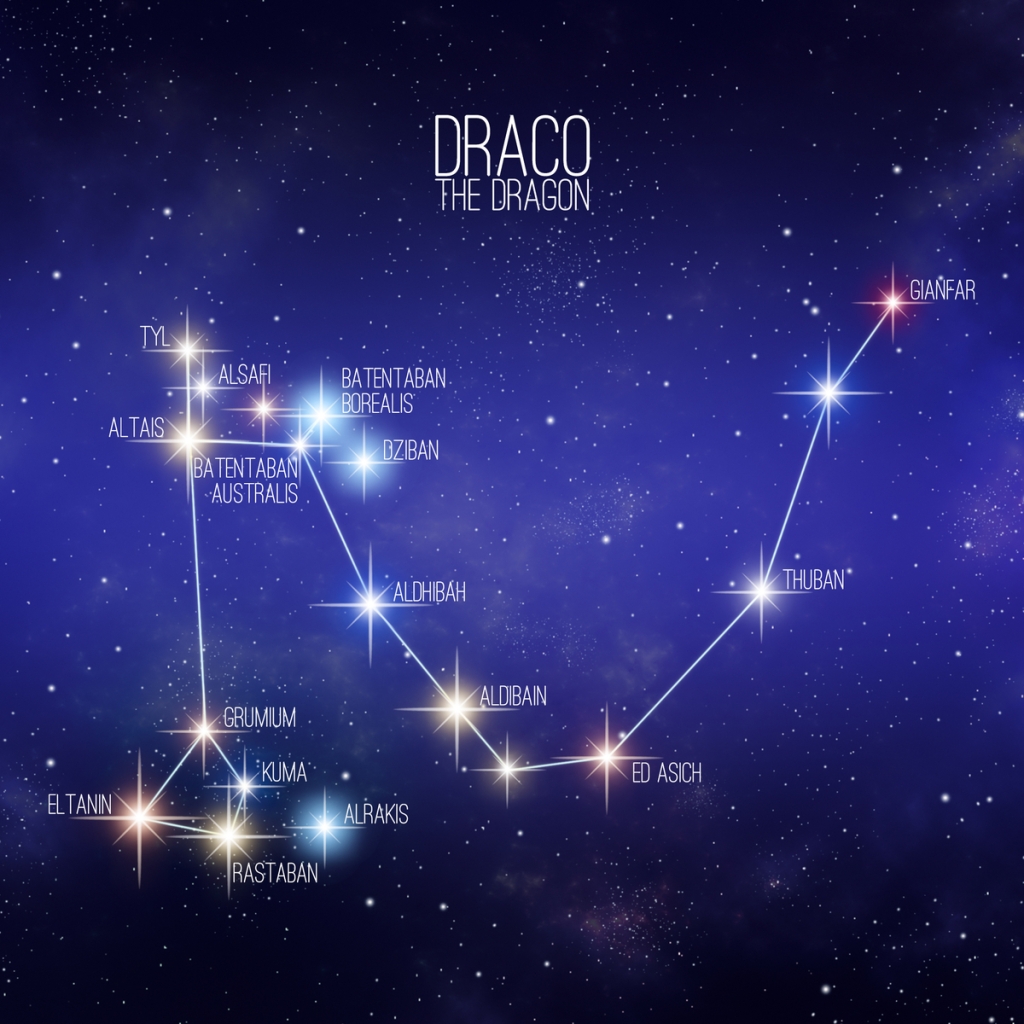 Book a session with Margot and experience the amplitude, efficacy and integrity of her Healing work. Her modality is swift, comprehensive and expansive, delivering verifiable benefits and conclusive healing outcomes for all forms of physical dis-ease, mental disorders and emotional imbalance. Her sessions also work to rapidly clear away all subconscious limitation, blocks, defensive conditioning and self-sabotage. DISTANCE HEALING available. For more information visit http://www.sydneyhealer.com.au